Brighten and Lighten – The Transformation!

So you’re going to get 10 for the price of one today. We’ve finally finished up the kitchen, so I get to show you where ALL (and I do mean all) our time has gone over the past few weeks. I’ll walk you through some of those projects tomorrow, but for now, just the fun before and after pictures. 🙂

I’ve been talking a lot about brightening up both the kitchen and the family room. Both spaces were so dark, even in the middle of the day. So I’ve been using all the tools in my arsenal (and stealing a few from other people’s as well) to brighten up both spaces. 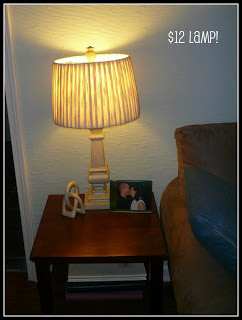 Check out my $12 lamp from TJ Maxx! Gotta love that store. The fixture had broken off, but a little super glue and 30 seconds took care of that. I knew that linen-like shade would look good against the grass cloth. 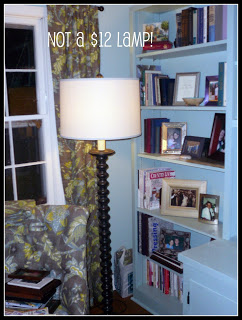 So I spent the $$$ that I saved from the other lamp on a GORGEOUS floor lamp from Bassett. Now to be fair, I did get it at 30% off when I bought the couch, but it’s still not an especially good deal. However, I loved it, it’s perfect for the spot and totally worth every penny.
Finally, the biggest change in lighting has to be the pendant lights that my sweet Daddy spent HOURS on. Here’s a reminder of what the kitchen looked like from the living room before: 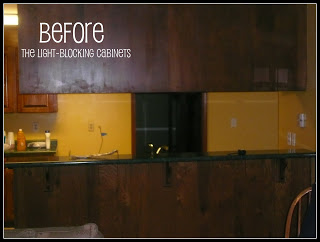 Then we took down the cabinets and it became this: 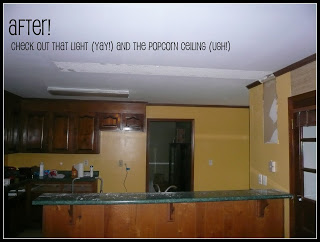 Then, after painting the cabinets and removing the popcorn (still not over that little surprise), Daddy and John had to wire the space for lights (which basically meant ripping multiple holes in the wall). Then they put up the pendants, but they were took long and would hang in the way. So my Dad bought a tap-and-die kit to cut the poles down and then re-thread the inside (why that’s called tap-and-die, I really have no idea). Not an easy or quick process. Still, it makes such a HUGE difference: 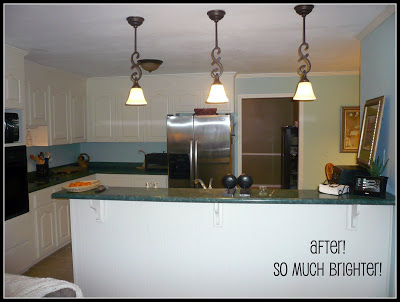 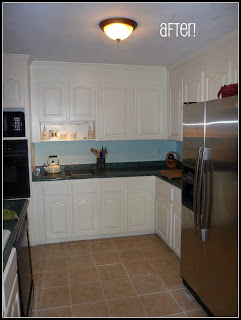 We ‘ll talk about that process of painting the cabinets at another time. Let’s just say IT WAS NOT FUN. Replacing that hideous fluorescent light was a good decision, which some people advised against.  The “new” fixture came from the family room where we hung the new ceiling fan… so it was FREE! Not too shabby.
We also got a grease trap installed by a grease trap service.
Now, I know this has been a long post, but there have been so many projects in this space that it’s just going to take a bit of time…
I really need to brag on my wonderful husband for a minute. We had this weird desk in the corner of the kitchen. 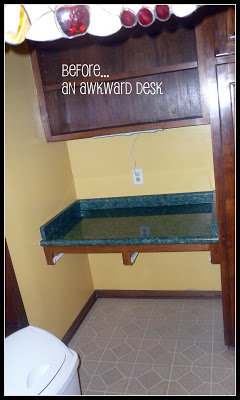 It seems to be a 80’s thing because a lot of houses from this time period have them. However, it’s very strangely positioned and I’d never use it. But we didn’t know what to do with that space. We threw around a bunch of different ideas, but John came up with the idea to make it an area for my baking supplies. So he raised the desk to counter height (about 6″), added a new outlet, and cut out two of the old cabinets from the divider:

and put them under the old desk. 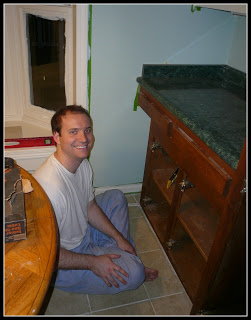 Seriously, how cute is he and how great do my new cabinets look?
Now, I know I make that sound like a simple process, but it wasn’t.  He had to cut them off of the original structure and build a box for them to sit on… he did a lot to make this work for me.
When all was said and done, I now have a perfectly sized baking center under all my cookbooks. I LOVE IT! It’s really one of my favorite things about the kitchen (along with the pendants… I do love those pendants).

I still have to add the cabinet hardware and touch them up, but overall, I’m happy to be in a functional kitchen again. What do you think of the kitchen transformation?